In October 1979, Jim took a trip to the UK based Oxford Scientific Films to discuss possible effects technologies for The Dark Crystal. Clearly impressed, he noted in his journal “Neat!” The company had started off as a supplier of nature or biological footage and had expanded their expertise into micro, macro, snorkel, slow-motion and time-lapse photography along with other innovative effects.

Creature Shop producer Duncan Kenworthy started a dialogue with Peter Parks at OSF about how they could collaborate. OSF made a presentation on May 3rd, 1980 to Jim and his team about various possible contributions that Kenworthy summarized in a memo: “It’s my understanding from Jim that he would like OSF to go ahead with developing some skies for us, according to designs which Brian Froud is now working out. These will be dramatic skies from four or five key points in the script rather than general skies to be used throughout.” Other ideas for OSF’s services included using their “aerial image bench” for a few shots, and Kenworthy saw, “two possible uses for the Snorkel camera. The first, and more difficult, is to shoot the opening tracking shot in the movie, along the landscape and up to and around the castle. The second is to achieve an ‘effects’ shot of the camera moving through a very small aperture.”

In the end, Jim didn’t use Oxford Scientific and went with an array of other techniques and personnel to realize his vision for the film. For the dramatic skies, Christopher Finch, author of the “making of” book, explained, “One major special-effects task was to devise spectacular and unusual skies for the storm sequence at the beginning of the movie. This was achieved by suspending colored liquids in water in a glass tank, the pigments creating ever-changing cloud formations, chemical compounds sometimes reacting violently to one another.” 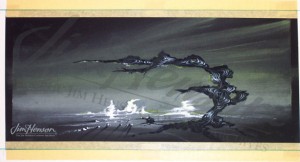 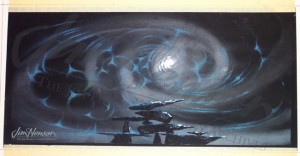 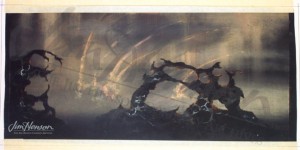