Jim was thrilled, of course, with the attention his first feature film received in the UK (starting with the Royal screening), but the stateside premiere four weeks later was perhaps even more satisfying. When The Muppet Movie opened in June 1979, it was a critical and box office hit, catapulting Kermit and Miss Piggy into the realm of super-stardom. With a script from Muppet Show writers Jack Burns and Jerry Juhl, the film combined the show’s wacky humor with the passion and decency of the characters, imbuing the film with heart. Entertainment was the paramount goal, and the movie was filled with celebrity cameos, terrible puns, and musical numbers set to Paul Williams’s and Kenny Ascher’s memorable songs. And along with the laughter, audiences also gained insight into the journey that Jim and his team had taken as they came together over twenty-five years, building on the strength of their talents and the depth of their relationships. 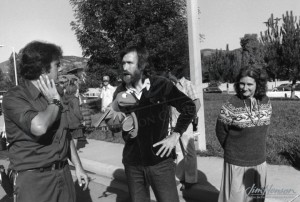 Jim and Jane Henson during filming of The Muppet Movie, 1978. 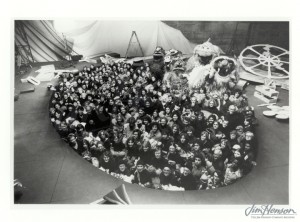 Puppeteers in place for the finale of The Muppet Movie, 1978.