When writer, director and producer Jon Stone suggested having Jim and the Muppets join Sesame Street during the show’s development period in 1968, Joan Ganz Cooney, founder of Children’s Television Workshop, was intrigued. She recalled seeing a reel of Jim’s commercials which made her, “fall over laughing.” “I couldn’t believe that puppets could be so hip and funny,” she remembered. Twenty years later, Jim was delighted to participate in a salute to Cooney with the Graham-Windham children’s charity. Jim had been honored two years previously and Cooney had made a gracious speech. For her tribute, Jim performed Kermit who sang the Sesame Street classic, “Bein’ Green”.

In 1989, Jim presented Cooney with a Lifetime Achievement award at the Daytime Emmy Awards ceremony. In his speech, he noted, “Joan has led and inspired us all. She showed us that television can be used for really good things – that good children’s programming can be educational, entertaining and successful.” Around the same time, the two discussed their work together on camera as part of the television special, Sesame Street: 20 and Still Counting. See a clip of these two visionaries from that program. 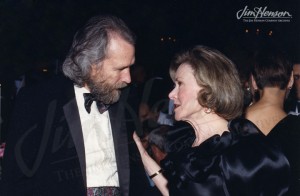 Jim with Joan Ganz Cooney at the Graham Windham tribute, May 26, 1988. Photo by Matthew Mauro. 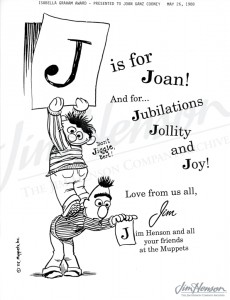