Jim always tried to allow guest stars an opportunity to play against type or do something they normally didn’t get to do. Comic actor Don Knotts, best known for square characters like Barney Fife and Ralph Furley, is given a chance to play the hipster when Fozzie suggests a jazz number, “Lullaby of Broadway” for the finale. Sax player Floyd Pepper (performed by the very hip Jerry Nelson) is impressed and briefly admires Fozzie for his hipness. When the number literally blows up, everyone is relegated to their original personas.

Knotts’ episode is memorable for a few Muppet-only bits. An emotionally tortured character with revolving legs designed by Jim frantically sings “Windmills of Your Mind” – a comic bit exploring themes similar to some of Jim’s more serious experimental pieces from the 1960s like “Organized Brain”. A truly charming piece features Rowlf singing the lyrical “Wonderful World” to a real live puppy, underlining that sweet side of the Muppets and their creator. 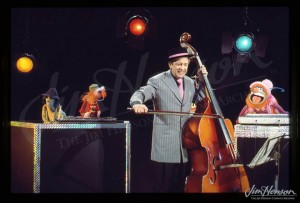 Don Knotts sitting in with The Electric Mayhem on The Muppet Show. 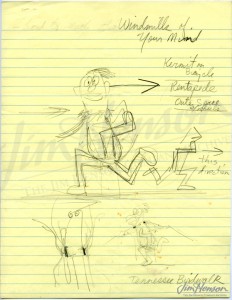 Jim’s concept for the “Windmills of Your Mind” bit on The Muppet Show.

This entry was posted in 05-May '77, 1977, Muppet Show and tagged Don Knotts, Floyd Pepper, Fozzie, Jerry Nelson. Bookmark the permalink.