In April 1973, Jim got the green light from ABC executive Michael Eisner to start work on a television special featuring the Muppets. This would be The Muppet Valentine Special with Mia Farrow which aired the following January. He immediately started thinking about the team he would need for production. One possibility was Michael Kidd, a multi-award winning choreographer for both the Broadway stage and the silver screen who worked with such dance luminaries as Fred Astaire and Cyd Charisse. Kidd had choreographed a show with Julie Andrews in the late ‘60s. Jim appeared on her special in February 1973 so Andrews may have been the source of his introduction to Kidd. Given that Jim planned to have Thog dance with his star on the Valentine show like he had with Andrews on her show, he probably would have welcomed her insight. In the end, Thog’s dance number with Mia Farrow to “Real Live Girl” was choreographed by dancer Christopher Lyall, partner of puppet builder and costumer Kermit Love who was instrumental in the creation of Thog. 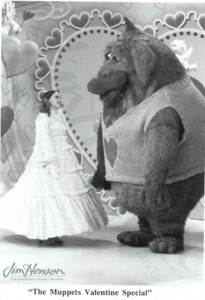 Mia Farrow and Thog dance together in The Muppet Valentine Special, 1973. 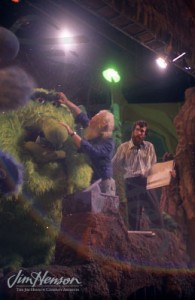 Kermit Love (and Jim) with Thog’s friend Thig on the set of The Great Santa Claus Switch, 1970.