Jim was naturally delighted to visit the set of the television series Mother Goose Stories where his son Brian was making his directorial debut. Having worked together on various projects over the previous years, Jim had great confidence in Brian’s abilities and was happy to leave the show in his capable hands. It was a good place to start. Like Jim’s early efforts creating Muppet versions of fairy tales, the Mother Goose project allowed Brian to work with existing material and characters that could be adapted to his creative vision. Given how short most of the rhymes are, Brian, producer Roberta Kurtz, and his team had a great deal of leeway in expanding the stories. Using L. Frank Baum’s book, Mother Goose in Prose, as a jumping off point, they adapted 39 rhymes (grouping them in threes to make half-hour episodes), providing a backstory for each. Jack Horner, for example, is best known for eating Christmas pie. His episode takes the viewer back to the action before his great plum discovery. According to the press materials, “Jack is working in the forest when he hears some urgent cries. It’s a traveler who has fallen in a bog. Is it too late for Jack to rescue him or can he save the day and earn himself one of his grandmother’s Christmas pies?”

When the show premiered in 1990 (after Jim’s passing), there was great interest in the fact that Jim’s son was continuing in the business. On a morning talk show, Brian noted, “My father was always a guiding hand, a guiding influence.” Clearly, Brian paid close attention. Directing came naturally, and Brian won a Daytime Emmy Award for Outstanding Directing in a Children’s Series on Mother Goose Stories. 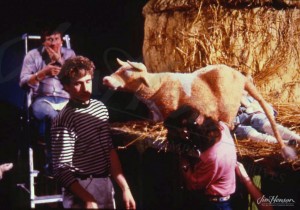