In an inspired fit of lunacy, the Muppet Show writers decided to set the third season episode starring Loretta Lynn on the platform of a train station, even having the cast tape a specialized theme song opener (describing the show as “inspirational, railroad-stational”). Jim was a country music fan (having gotten a big start on national TV with singing star Jimmy Dean); he felt at home with southerners and enjoyed working with Lynn immensely. She was a good sport and seemed to fit right in with the Muppets. Jim made some notes in a diary about some of the guest stars, remarking that Loretta Lynn was, “Wonderful, warm, real – an amazing story to her career – and she’s like ‘real folks’ in North Carolina.” Jim’s record collection held four of her albums and a few years later, she sang along with The Count for the “Sesame Country” album.

It was clear that Lynn enjoyed her time on the show. After appearing, she wrote a warm thank you note to Kermit and the gang, saying “I just wanted to say thank you for being such a wonderful host to me and Doo when we did your show…even though you did spend most of your time running away from us on the trains and being chased by all them dogs and such. Fozzy and Floyd and Scooter and Gonzo all done a real good job and I guess that’s probably cause you’re such a good leader. Anytime you’re in Nashville, I got this terrific big pond that you’d just love down at the house. Just watch out for the ducks!”

Lynn shared her great experience on The Muppet Show with her family, inspiring her sister Crystal Gayle to guest star the following year. Read about her experience – she got to perform inside the theater! 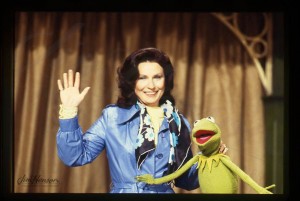 Loretta Lynn with Kermit the Frog on The Muppet Show, 1978. 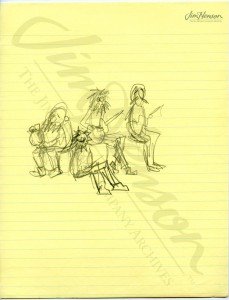 Jim included jug bands in several Muppet Show numbers and, of course, in Emmet Otter’s Jug-band Christmas. This sketch was an idea he had in the mid-1970s for such a group.