Given that Jim and Jerry Nelson performed their Gorch characters with Raquel Welch on Saturday Night Live in 1976, it’s surprising that when she guest starred on The Muppet Show in 1978, Jim noted in his journal that it was the first time he had really met her. Perhaps on SNL, their interactions were brief and he did not really have a chance to get to know her. On The Muppet Show, Jim had a better opportunity starting with the pre-production dinner he and his executive producer Dave Lazer usually had with the star of the week. Jim wrote of that evening, “Having just had dinner last night with Raquel Welch seems a memorable sort of event one should make note of – Dave and I ate with she and her guy at Julie’s in Holland Park – a lovely meal – and we came out of it liking her – a nice person.”

On the show, despite Miss Piggy’s initial concern about sharing the stage with Welch, the two leading ladies bonded by the end of the program. Having another “international sex goddess” (Miss Piggy’s description) on the program could have been a major disaster, but Welch generously partnered with Miss Piggy on the finale “I Am A Woman” in the name of womanly solidarity. It probably didn’t hurt that Welch’s attentions during the program focused on Fozzie rather than a certain frog. 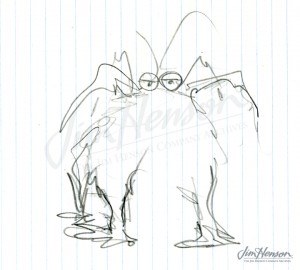 Jim’s rough sketch of a spider puppet that danced with Raquel Welch in The Muppet Show, 1978. 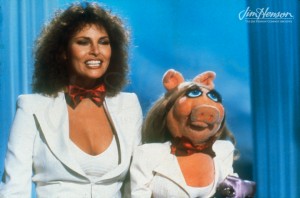 Miss Piggy and Raquel Welch on The Muppet Show, 1978.