Jim (along with conceptual designer Michael Frith and Henson business exec Bob Beitcher) had lunch with Pam Lack (whom Jim knew through the Graham-Windham children’s charity) and Charlie Grinker of CEL Communications, a television documentary production company, to discuss development of a television series that utilized CEL’s library of historical footage. What evolved instead was a show concept featuring a combination of animal puppets and live footage that would teach children about the animal world and their place as a member of it. Keeping in mind the line from The Better World Society (in which Jim was active) “What if everyone in the world lived in one house? We do!” the show was to teach animal conservation and encourage children to act responsibly. A memo giving an overview of a meeting about a year later explained, “Jim Henson Productions has, for a long time, been interested in trying to use our resources and our influence to say good things about different subjects. Sesame Street, over the years, has taught kids to read and become academically literate. Now we would like to make children environmentally literate.”

After much discussion and several brainstorming meetings which, among others, included experts from the Bronx Zoo, Michael Frith oversaw the design of a pitchbook for W.I.L.D. The First All Animal Network. This weekly, half-hour show would take place inside the “first all-animal superstation, a global broadcast network that is run entirely by, for and about animals.” From their wilderness-themed studio, the cast of new Muppet characters would present segments that mimic standard TV programming like a morning show, a sports program, comedies, etc. Animal correspondents on location would report on real animals, using actual nature footage for the visuals.

The concept went through various incarnations over the next five years. Eventually, it took the form of a talk show with animal puppets as hosts and guests and was announced in a press release dated March 5, 1994: “Jim Henson’s Nature Series Slated to Join the Fox Children’s Network Fall Line-Up.” Production for what would finally be titled Jim Henson’s Animal Show with Stinky and Jake began on August 1st of that year at Fountain Studios in London, and the show premiered on October 3rd. The live-action wildlife footage came from a UK based animal conservation group Survival Anglia.

In one episode, Stinky (a skunk performed by Dave Goelz) and Jake (a polar bear performed by Steve Whitmire) interviewed a lion, and in another, to underline the message that we, too, are part of the animal world, a human was the guest. The puppet was designed to look like performer Dave Goelz and the live-action footage was shot in his home with his actual family. 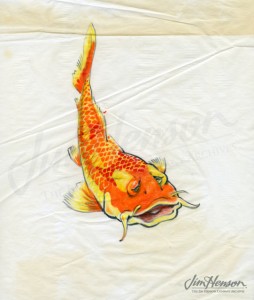 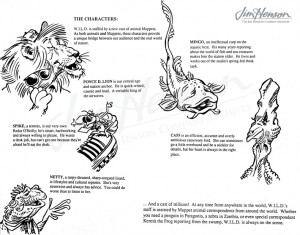 Character deescriptions from the original 1989 pitch for W.I.L.D. with Michael Frith’s illustrations.