Jim made the most of a five day trip to California in 1975, meeting with local CBS channel KPIX to talk about children’s programming, spending a couple days with Jerry Juhl working on potential Muppet Show ideas, and then a day in Los Angeles to check in on the Ice Follies show. While the work with Juhl and the LA visit took up most of Jim’s time on the trip, he thought deeply about the impact of television on children so those discussions at KPIX would have been important to him.

Almost from its inception at the end of the 1960s, Action for Children’s Television, the first national effort to gauge the effect of television programming and advertising on children, was a meaningful organization to Jim. He was actively involved, speaking at their first symposium in 1970, and later participated in the National Council for Children and Television (receiving their 1983 Career Achievement Award), the American Center For Children’s Television, the New York State Governor’s Advisory Council on Motion Picture and Television Development, and he advocated for responsible programming through the Better World Society.

Jim’s 1970 speech at the ACT symposium referenced his experience on Sesame Street and focused on the economic realities of producing quality children’s television. He did not really have any concrete suggestions, but spoke more in a sort of “food for thought” mode to get his audience thinking. He noted, “People can moralize about it, but it is still true: Television is still an industry to sell products.” He felt the networks, motivated by their need to see a profit, would not spend what it takes to make good TV. Ideally, Jim wanted to, “…see commercials completely separated from the children’s programs,” but was pessimistic about the possibility. Jim saw a need to find other ways to fund new programming in order to remove the commercial influence from a child’s viewing experience. He presented Sesame Street, originally underwritten by governmental and educational institutions, as a model but said that did not solve the problem of getting quality educational material on commercial television. Jim reminded the audience that “…the networks were not set up to educate… although it is certain they are educating and influencing [children].” While he did not offer any real solutions, except that children’s television can be less expensive because it can be rerun or segments repurposed more easily, Jim’s focus on the money side was important; it was an issue to be approached head-on rather than be danced around. He finished by saying, “I keep stressing money, but that is really where it is at. Good, interesting, entertaining education can be done. It can be done very easily. It just costs money.” 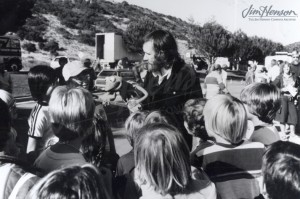 Jim and Kermit taking time to talk with children on the set of The Muppet Movie, 1978. 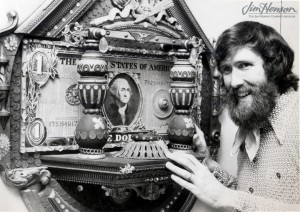 Jim with his tongue-in-cheek “Shrine to The Almighty Dollar” that he made in 1965.