By the 1950s, the glittery pianist and entertainer Liberace had a global reputation as Mr. Showmanship and was an obvious celebrity to ask to host The Muppet Show. With his flamboyant style and winking performances, he seemed like a perfect match for the Muppets. Despite Kermit’s best efforts to have a dignified show for someone of Liberace’s caliber, the first half was the usual chaos featuring Miss Piggy in two musical numbers surrounded by her pig brethren along with disruptions from Animal and confusion from the Swedish Chef. For the second half, instead of having his guest star try something he had never done before, Jim decided to let Liberace play a special concert along the lines of his regular Las Vegas show. To customize it for The Muppet Show, Liberace’s concert was dedicated to “all the birds.” Given that Jim loved bird characters and had created an array of types over the years, this would have been a special joy for him. Lyrical gulls floated through the air during “Misty” while a troupe of dancers in bird costumes performed to Chopin’s “Nocturn in F Sharp.” Sam represented the Eagle species but became indignant when Liberace departed from the classics to play a jazzy “Five Foot Two” and “Charleston.”

While sitting at the piano in an extravagant outfit was typical for Liberace, The Muppet Show did provide a first for him. “In all my years of working in show business, I have never had an experience like [this,]” he explained. “I have performed all over the world, but I have never worked with puppets. I have certainly never been reprimanded by an eagle, introduced by a frog, or accompanied by a hound on the keys. Working with the Muppets has proved to be a unique experience – and an exceptionally happy one.” Jim enjoyed the shoot and appreciated Liberace’s style. When the pianist had a birthday the following month, Jim sent him an over-the-top gondola of flowers. 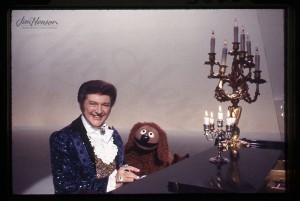 Liberace and Rowlf on The Muppet Show, 1978. 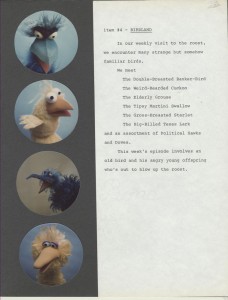 Jim’s idea for a recurring bit featuring an array of bird from a Muppet Show proposal, early 1970s. 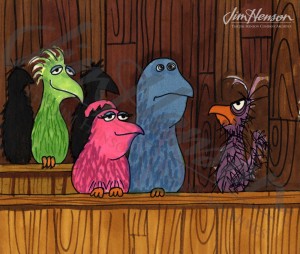