With the popularity of MTV and Jim’s relationship with HBO via Fraggle Rock in the early 1980s, it’s no surprise that the Muppets made their own music video to air on both cable TV channels in 1984. The freestyle approach of most music videos, mixing an array of visuals and effects to create a narrative of sorts to accompany a song was just the sort of project that intrigued Jim. And the musical number, “I’m Gonna Always Love You” with the Muppet Babies puppets created for The Muppets Take Manhattan was an ideal jumping off point. Directed by Jim with Jeff Moss’s song remixed by John “Jellybean” Benitez, the video combined footage from the film with newly created footage parodying a variety of music videos then on the air. There was a real frog (named Vito) in a Kermit collar and a real pearl-wearing pig (named Dorothy Pig Newton.) Jim even made a cameo, wearing Devo style glasses and oversized Kermit feet.

Clearly, everyone involved had a good time during the shoot and production notes provided to the public relations team described some of the behind the scenes activities: The set was made surrealistically large – much larger than the one used in the movie, and each shot was kept to three seconds or less. Dorothy (the pig) ate three giant boxes of Fig Newtons during the shoot. And when they were finished, Jim bet the set designer John Davis (a former football player at Ol’ Miss) five dollars that he couldn’t hit the set window with a football at 25 feet. He hit (and smashed) the window on the first throw.

The video was a hit – it was named as a finalist at the 1985 VPA Monitor Awards in the Best Achievement in Music Video category, and Jim was named finalist in the Best Director category. The Muppet Babies got a boost in their visibility among a range of audiences, helping their animated show achieve popularity very quickly after it premiered in September 1984. In addition, Jim was inspired by the innovative approach to imagery and narrative used in making music videos and sought to replicate some of that when he began producing his Storyteller series in 1986, hiring several directors with music video experience. 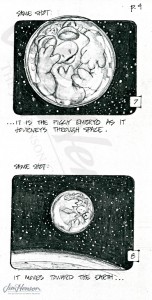 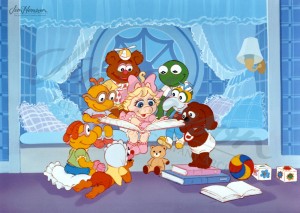 The Muppets Babies in their animated series, co-produced with Marvel, 1980s.