With his Creature Shop established and Brian Froud on board, Jim started planning for a second fantasy film in early 1983. His experience with The Dark Crystal taught him that story was paramount, and Jim asked Fraggle Rock lyricist (and Canadian poet laureate) Dennis Lee to help develop a narrative. Lee produced a “poetic novella” outlining a coming-of-age story set in a Froudian world of goblins, hairy beasts, and animated masonry. This time, humans were central to the story, which was drafted into script form by Terry Jones and Laura Phillips. Focusing on the emotional journey of the main character, Sarah, Jim sought input from his producer, George Lucas, numerous Henson colleagues, and from writer/actor Elaine May. At the same time, Jim sketched out ideas for various scenarios in a blank book, and Brian Froud produced elaborate watercolor and gouache paintings of concepts for the film based on their early discussions.

Jim’s Labyrinth idea journal will be on exhibit at The Experience Music Project/SciFi Museum in Seattle starting on April 27, 2013. 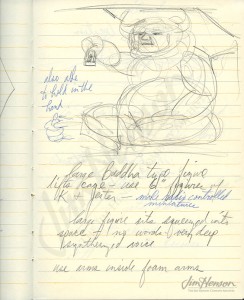 One of Jim’s ideas for someone Sarah might encounter in the Labyrinth, 1983. 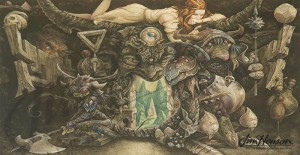