With increasing interest in Jim’s work from the networks and the start of work on The Muppet Valentine Show, the Muppets were outgrowing their workshop space at 227 East 67th Street. Jim looked for something nearby and found space up the block in a building on the corner of 67th Street and Third Avenue. At street level was a deli, and around the corner was a separate entrance and an elevator (a real luxury). Over time, the Henson workshop occupied the 3rd, 4th, and 5th floors with room for storage and shipping on the 2nd. Hundreds of puppets were born in that space over almost thirty years. In the early 2000s, the Workshop moved downtown and now puppet building for The Jim Henson Company takes place in both Long Island City, Queens and Burbank, CA.

While Jim’s office starting in the late 1970s was two blocks away in the double townhouse on East 69th Street, he spent much time in the workshop consulting on the creation of his characters. In January 1978, he and Don Sahlin gathered the development team to discuss the puppet build for The Dark Crystal and to give Brian Froud and Wendy Midener an introduction to the Henson technique. The videotaped session included a discussion of how the placement of the facial features impacts the expressiveness of each puppet. 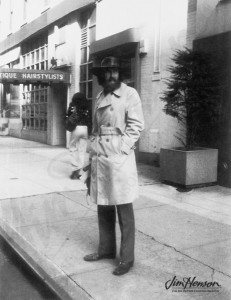 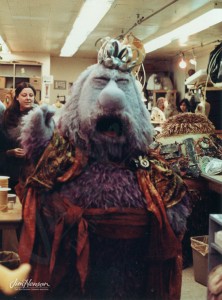 Giant Muppet heads in the workshop at 201 East 67th Street.