While Jim was very interested in new film and video technologies for creating work, he also delighted in making his work available to audiences in new ways, particularly in the evolving world of home entertainment. In 1969, he helped RCA with a market research project for their development of a home video disk player, the Select-A-Vision. By the mid 1970s, VCRs were becoming readily available for home use, but the toy companies were already there. In 1973, Fisher-Price came out with their Movie Viewer, a toy shaped like a Super-8 camera that allowed children to watch short films at their own pace. Jim and the Sesame Street team signed on to provide content, mixing existing elements from Sesame Street with newly shot material. A child would load a cartridge containing a brief 8 mm looped film into the hand-cranked device, and holding it up to a light source, could watch the action as fast or slow as desired. The film could even run backwards (and forwards and backwards and forwards), allowing for a personalized audience experience. Some of the titles offered were: “The Count Presents: Numbers,” “Sesame Street Shapes,” “Cookie Monster in the Kitchen,” “Big Bird’s Birthday Party,” and “On the Way to Sesame Street.”

Another way for children to watch the action on Sesame Street at their own pace was using the Viewmaster. This was based on the 19th Century technology of the stereoscopic viewer. By looking at two identical images at once through a special double lens device, the image would appear to be three dimensional. The Viewmaster’s unique design, with the images set into a circular card that could be advanced with the click of a lever on the side, allowed for a series of images, often telling a story, to proceed in succession. Over the years, Henson characters (from Sesame Street, the Classic Muppets, Fraggle Rock, Dinosaurs, The Wubbulous World of Dr. Seuss) were carefully photographed in myriad situations and locations just for this product. Scenes from Jim’s feature films, including The Dark Crystal, were also made available to audiences in this fashion.

The hand-held nature of the Fisher-Price toy was intriguing to Jim, providing tremendous freedom for the user. In 1990, Jim’s enthusiasm for the new hand-held video camera, the Handicam, was evident and he began development of a television show called Handmade Video featuring “three guys and a camera” traveling around and spontaneously making programming. Jim’s idea did not come to fruition, but one can only imagine how inspired Jim would have been by Youtube and the idea of little children both making movies and watching them on today’s cell phones. 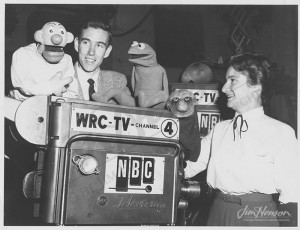 Jim and Jane (then Nebel) with a decidedly non-hand-held television camera in the late 1950s. 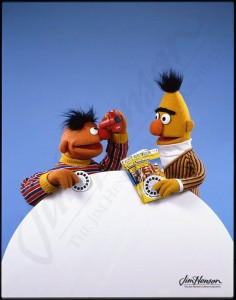