Jim often mixed work and play because as far as Jim was concerned, his work was his play. Given how all-consuming his work was and the amount he traveled, he also made a point of including his family in his professional life in order to make sure they spent time together. His March 1976 trip was a good example of that. Taking advantage of an invitation to appear on Japanese television, Jim, Jane and their older daughters Lisa and Cheryl made a visit to Albuquerque to see Jim’s dad before heading to Hawaii for a little relaxation and then on to Tokyo and Kyoto. As Jim settled into his Muppet Show shooting schedule in London that spring, requiring him to be away from home for long periods of time, this sort of trip became typical for the family. In this way, Jim exposed his children to his working world, giving them a chance to participate in a meaningful way, as well as exposed them to the world at large traveling with them around the globe. 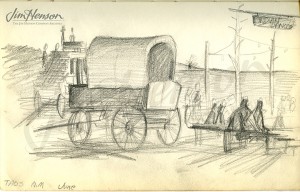 Jim’s sketch from his first trip to New Mexico in 1957. 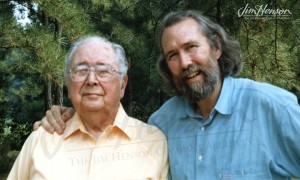