When Jim showed his Dark Crystal film to a preview audience for the first time, he was disappointed with the response. Despite the impressive visuals, the story was hard to follow, particularly because the Skeksis spoke in an invented language with no subtitles to give a clue to what was being expressed, and the audience’s displeasure was clear. It was particularly hard because Jim had labored so long and intensely on this project. He first started contemplating the idea five years earlier and had set his team to the task in early 1978. But he was not deterred and went back to work, asking screenwriter David Odell to pen new dialogue for the Skeksis that could be dubbed to match their mouth movements. A new version with the dubbed dialogue and other edits was ready to screen in Detroit that July, and, as Jim described it in his journal, it went, “…a bit better.”

In late January 1978, Jim met with his creative team in his New York workshop to discuss puppet construction as they prepared to begin development of the characters for The Dark Crystal. See how he used Scred from Saturday Night Live to demonstrate. 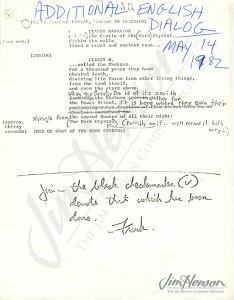 Script page for new Skeksis dialogue for The Dark Crystal with notes from Jim and Frank Oz, 1982. 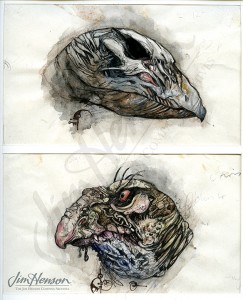