For The Muppet Show pilot Sex and Violence, Jim and his team created a host of new characters including the members of The Electric Mayhem. Their charismatic leader Dr. Teeth was a particular joy for Jim, giving him a chance to put his laid-back hipness on display through the character. Dr. Teeth was featured on promotional material for the show, and when Jim went out to Burbank to perform on Johnny Carson’s Tonight Show, he brought Dr. Teeth along to represent the cast.

Given that Kermit only had a small role in the pilot, it made sense that Jim featured a more prominent player when promoting the show. Dr. Teeth appeared on The Mike Douglas Show in February, and for the week of March 3rd, the “Pop Scene” wire news service featured him in an article that started with, “Move over, Dr. John! Here comes Dr. Teeth!” Jim enlisted Sesame Street writer Norman Stiles to help come up with some pithy lines – when asked about his start in music, Dr. Teeth replied, “Well, ya see, I was working in demolition before this. I was blowing up buildings and one day I looked down in the street and saw a bunch of kids boogying to my blasting. So I knew I’d found my milieu. I also figured there was a lot of money to be made and I should make some of it, or a lot of it. I don’t know. Most of it.” When asked about his distinctive grin, Dr. Teeth explained, “I melted down my gold records to get this tooth. You might say I put my money where my mouth is.” 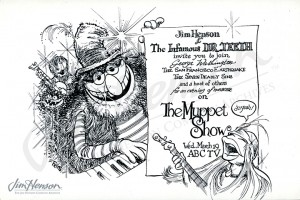 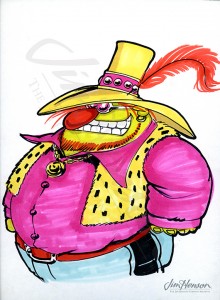 Bob Taylor’s character design that inspired the look of Dr. Teeth, about 1973.