In 1983, Jim was approached by the National Wildlife Federation about the possibility of Kermit’s serving as their spokesfrog the following year in support of their clean water campaign. Jim was happy to oblige, and he and his team taped the first of what would be many public service announcements for the NWF. Kermit was made honorary chairman for National Wildlife Week the following spring. Jay Hair, NWF Executive Vice President explained, “Kermit is the perfect chairman for the 1984 water conservation theme. [He] is immensely popular with millions of people of all ages – and besides, who knows more about the importance of clean water than a frog?” At the March 17th annual meeting, Kermit (in a speech ghost-written by Michael Frith) spoke about his early Washington years, struggling to breath in the polluted Potomac River, and expressed his deep appreciation for the NWF’s efforts that were cleaning rivers everywhere. He said he was honored to serve as chairman, explaining, “It’s the least I can do. We know you’ve done more than any other group to make the world safe for pollywogs.”

The Muppets continued to star in PSAs over the next six years. At the NWF meeting exactly six years later, Jim was presented with the National Conservation Special Achievement Award for “Outstanding contributions to the wise use and management of the nation’s natural resources.” Given Jim’s lifelong commitment to environmental causes, it was an appropriate tribute. 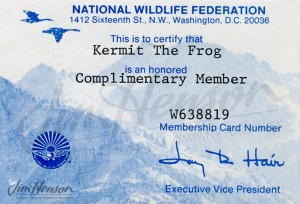 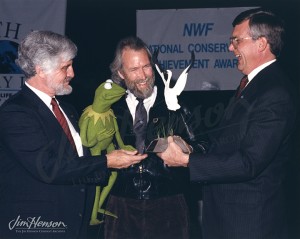