Long before the internet, iPads, and Xbox, there was growing concern about the quality and quantity of screen time for children. On March 13, 1983, The National Council for Children and Television inaugurated National Children and Television Week by presenting their first annual career achievement award, to Jim Henson. The engraved crystal honor read, “For distinguished achievement serving the well-being of children and families through television entertainment,” and was presented to Jim at a gala dinner hosted by Dick Clark, Bob Keeshan (Captain Kangaroo) and Henry Winkler (The Fonz). Other special events that week included a poster campaign, teacher workshops, seminars for people in the television industry, recognition of corporate sponsors of educational television programming, and the launch of an effort to teach kids that, according to NCCT President Nicholas Van Dyck, “they can be selective about what they watch on television, and that what they choose to watch can be more rewarding on the basis of the thought they give their choices.”

These efforts were near and dear to Jim’s heart and he was pleased to accept the award. He recognized that, “Television used well is one of those things that can be a terrific tool,” and understood its power to impact audiences. To that end, he saw the potential to use the medium as force for good. In a 1986 interview, Jim explained, that whatever the quality of what is airing, “Kids are going to watch television anyhow. So why not put something on television that’s good for them?” 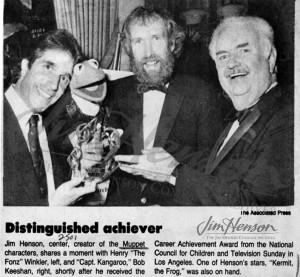