“We’re both hot tempered, unpredictable and have our eye on the boss!” joked Loretta Swit when describing her similarity to a certain lady pig on The Muppet Show. Swit’s guest star turn on the final season of the series involved her replacing Miss Piggy when a frustrated Kermit fired his porcine star after learning that she had planted a story about their supposed secret marriage in a tabloid. Best known for her role as “Hot Lips” Houlihan on the much loved TV show M*A*S*H*, Swit tapped her musical theater talents to perform a singing and dancing number, “I Feel The Earth Move,” with the giant Thog providing the earth shaking part. She played Piggy’s parts in Veterinarian’s Hospital and after confronting each other on the Pigs in Space set, Swit and Piggy reconciled and Kermit was convinced to rehire Miss Piggy. The whole cast let her know of their appreciation with the song, “Where Would We Be Without You.” 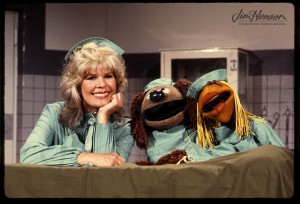