In March 1966, Jim and his team flew out to Los Angeles to tape two bits for the popular variety show The Hollywood Palace. The hour-long program had a loose vaudeville-like format (not unlike The Muppet Show) with a featured guest acting as host each week. To air on the 19th with guest host Robert Goulet, Jim created a new bit, “Music Hath Charms,” in which Kermit tried to tame a series of increasingly large monsters with his piano playing. He seemed to have success, but then the piano opened up to reveal sharp teeth and ate Kermit. Jim reprised the bit on The Ed Sullivan Show the following year.

The second piece, taped for the April 30th episode (guest hosted by Fred Astaire), was a Muppet staple, “Glow Worm”. Originated for The Jack Paar Program in 1964, this bit featured Kermit eating a series of small worms only to get eaten himself, this time by a giant Monster named “Big V.” Jim performed it twice on The Tonight Show and twice on Ed Sullivan’s show, but perhaps the most interesting time Jim used the bit was for a short lived situation comedy show called That’s Life.

That’s Life, starring Broadway and film star Robert Morse, was a combination of sit-com and stage musical. It aired on ABC for just one season in 1968-69, and chronicled the story of a young couple as they met, married, moved to the suburbs and had a baby. Each episode featured an extraordinary range of guests ranging from Sid Caeser to Ethel Merman and six musical numbers. It is unclear how “Glow Worm” fit into the storyline of episode 10 “Bringing Baby Home” which aired on Dec. 3, 1968 and centered on the expanding household. A later episode featured another puppeteer and friend of Jim’s, Bil Baird. 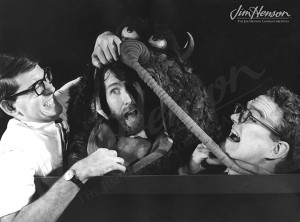 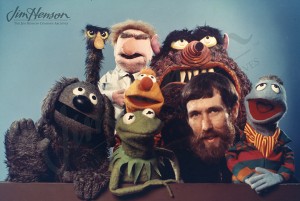 Jim and some of his variety show characters around 1968.