Having visited the 1958 international Expo in Belgium and been inspired by all of the new technologies he saw exhibited there, Jim was eager to participate in the 1964/1965 World’s Fair in New York in a meaningful way. He was invited to pitch ideas for a puppet show in the huge Chrysler Pavilion. That commission, to host the “Show-Go-Round” presentation, went to Bil Baird and his company (including Jim’s friend from Maryland Bob Payne and a young actor named Jerry Nelson), but Jim got the opportunity to create a character for the pavilion next door sponsored by the Swedish-based international ball bearing company SKF.

As part of a development agreement with Liebman Productions, a contractor working for Chrysler, Jim produced numerous pages of character designs. His sketches for the “entertainment program” as it was described in the contract were mostly alien type characters in an extraterrestrial landscape. A couple of large complicated machine/robot/computer type characters appeared in the designs as did charming animated car parts. When Chrysler passed, Jim moved on to SKF. For their exhibit, he worked with project designer Barry Howard and his company Imaginetics when they added new material for the second year of the fair. Jim’s contribution was a bleeping robot character that moved up and down as it greeted visitors with a sound effects-heavy monologue written by Jim and Jerry Juhl. It introduced a history of anti-friction engineering, starting with the title line, “I am a human being.” The robot corrects himself, acknowledging that he is a robot and was built by SKF, and explains that he was promised payment in ball bearings and ends by flipping his lid. An early foray into animatronics, Jim worked closely with Howard’s team to time the sound effects to very specific motions which were accompanied by the prerecorded track. Twenty-five years later, Jim would finally get to create an animatronic show for Chrysler in service of their traffic safety program. 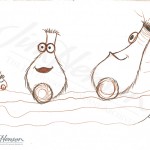 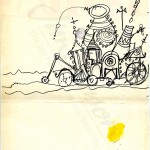 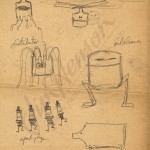 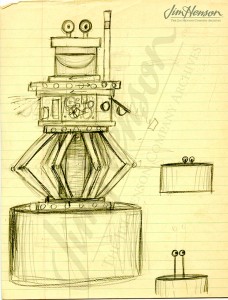 Jim’s design for his animatronic robot for the SKF Pavilion at the New York World’s Fair, 1964.