Jim took special pleasure in the success of Yoda from George Lucas’s Star Wars franchise because his team had a part in his creation and Frank Oz, Jim’s long-time colleague, performed the character. Stuart Freeborn, who was pioneering the use of latex in makeup and effects and was supervising that area for The Empire Strikes Back, was known to Jim through make up and effects guru Dick Smith. Jim was seeking information about the use of latex and, at the same time, producer Gary Kurtz who was working for George Lucas reached out to Jim regarding puppet making. Kurtz discussed the joint work with Fantastic Films magazine:

“During the preparation for Empire, I went to see Jim Henson about some assistance for a creature we were developing…that creature, of course, was Yoda. Jim had been working for many years on an idea for an all fantasy adventure using all mechanical creatures. Because Yoda was along the idea of this work, he thought it would be a good experiment. He offered a tremendous amount of assistance: Frank Oz and other members of Henson’s staff actually did the performing of Yoda and they offered their expertise to Stuart Freeborn who was the makeup and creature supervisor for the development of Yoda. That technology went back into The Dark Crystal.”

Puppet builder Wendy Midener (later Froud) worked most closely with Freeborn. The collaboration allowed for remarkable work on both sides with the creation of a host of memorable characters, especially Yoda. 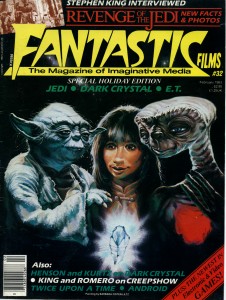