In 1983, Jim was honored by the American Film Institute alongside director John Huston. It may have been then that he became acquainted with Huston’s actor daughter Angelica. At the time, she was not that well known but her impressive looks and bearing might have stuck with Jim. She did, of course, earn much adulation for her performances over the next few years, especially her Academy-award winning role in Prizzi’s Honor, so it’s no surprise that Jim cast her in the role of the Grand High Witch for his film, The Witches.

It was a good fit, and Huston won much acclaim for the part. While not honored with an Academy Award this time, Huston was named Best Actress by the Boston Society of Film Critics Award, the Los Angeles Film Critics Association, the National Society of Film Critics Award, and she received the Best Actress Saturn Award. Entertainment Weekly gave the film a rave review, lauding the combination of Roald Dahl, Henson, and director Nicholas Roeg and particularly enjoying the Grand High Witch: “Don’t miss Anjelica Huston’s deliciously vile transformation from beauty to beast.” 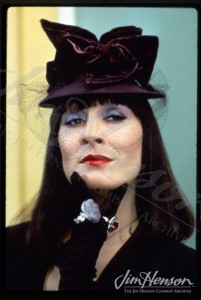 Angelica Huston concealing her character’s true nature in The Witches, 1989.