Jim was well known to the people at the Academy of Television Arts and Sciences for his daytime Emmy Award-winning work on Sesame Street. The debut of The Muppet Show in 1976 put him in a different category, eligible for primetime Emmys, and Jim was not disappointed. But before his show was nominated the first time, Jim and Frank were invited to present at one of the ATAS New York chapter’s “drop-in dinners” held at the Cork ‘n Bottle restaurant on East 52nd Street. After a cocktail hour and a trip through the buffet line, attendees were treated to “The Muppets Live.” According to the program flyer, “Jim Henson, the creator of the Muppets and his senior puppeteer, Frank Oz, will discuss and demonstrate how the Muppets are created for television. Some of these fantastic creations will be there, too. Learn how the characters are designed and built with television in mind, why sets are a special problem, and any and everything there is to know about making the Muppets.” Jim and Frank brought along a clip reel that included Ethel Merman’s Muppet Show rendition of “There’s No Business Like Show Business,” and, according to Jim’s journal entry, Merman joined them in person.

Later in 1977, The Muppet Show was nominated for three Emmy Awards and won for Best Individual Performance – Rita Moreno. Kermit and Fozzie appeared on the broadcast. The following year, the program won for Outstanding Comedy/Variety series. 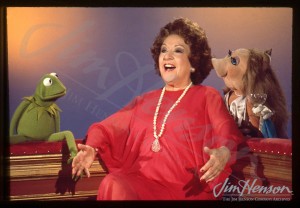 Kermit and Miss Piggy with Ethel Merman on The Muppet Show. 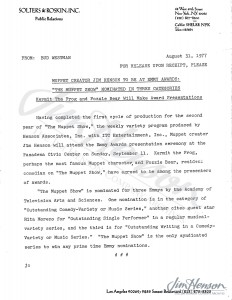