In 1971, Children’s Television Workshop made an array of deals to create various books and educational toys relating to Sesame Street. They did a number of books with Random House and announced their intention to create a Sesame Street Calendar. The first one produced, with illustrations by Jack Davis, was available for 1972. The second one, for 1974, was more ambitious.

Clearly, great thought and imagination went into this large scale calendar with color photos and extensive illustrations. Michael Frith, then working at Random House, served as Art Director, guiding the look of the piece. Charles Rowen took the carefully styled photos and David Gantz did the illustrations. As with all of their early products, great effort was made to imbue the calendar with educational merit. The back of the calendar assured parents that it, “…contains all the color and fun of Sesame Street itself. Each month is a big, bright poster that features one of the Sesame Street learning goals.” These included everything from Measurement and Cooperation to Ecology and Counting (for the Count’s favorite month, October, of course). The illustrated months were bordered by humorous lessons or crafts instructions, topped off by involved photos with detailed costumes, sets, props and lighting. Some of the images were taken at the 19th Century Salmagundi Club on lower Fifth Avenue, taking advantage of the décor as a backdrop for Thanksgiving and Christmas. As they do today, everyone involved took these photo shoots seriously, making sure each element was just right. Noting the photo shoot in his journal, Jim made sure that his characters would look their best on a product that people would enjoy every day of the year. 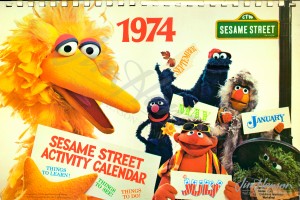 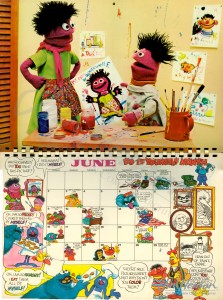 The month of June in the 1974 Sesame Street Activity Calendar.