Performer Dave Goelz, best known for his character The Great Gonzo, recently shared his reminiscences of his first meeting with Jim:

On Friday, February 2, 1973, I could barely contain my excitement, and for good reason. Jim Henson was coming to have dinner with me. The creator of the Muppets was journeying to my town. To see me. He wanted to talk to me about a project.

We had only met once before. The previous October I flew from San Francisco to Los Angeles to meet Jim, but when I arrived for our Saturday morning breakfast, I found Jerry Nelson waiting for me instead. Jim’s mother died the day before, and Jim flew to Albuquerque to be with his father. When Jerry told me the news, I said “I’ll head home and meet Jim another time.” Jerry replied, “No, Jim still wants to meet with you. He’ll be back tomorrow and would like to meet you at CBS Television City, where we’re taping a guest appearance on the Perry Como Christmas Special.”

I could not begin to fathom how Jim would be able to continue business under the circumstances. But then I did not really know him yet.

The following afternoon I met with Jim at CBS and showed him my portfolio. Jim was extremely easy to talk to, and brushed aside my concerns about his mother’s passing. I began to get an idea of his strength. As a 26 year-old industrial designer, my portfolio traced my career through Art Center College of Design, then my period of designing John Deere Tractors at Henry Dreyfuss Associates, and finally my work at Hewlett Packard Company. Every item in the portfolio was a product of industry except the last three, which were puppets I designed and built. I introduced the portfolio by saying “I hope this will show you why I could be useful to you as a puppet designer and builder.” After I showed him the portfolio, I told him my real interest lay in performing. He said “Well, we already have four star performers, but we occasionally need background puppeteers when we do specials.” In any event, we could use you in our workshop.”

I returned to CBS that evening at Jim’s invitation to watch the taping. I sat in the audience seats with Jane Henson, who had arrived that afternoon. “Will you be working with us?” asked Jane, and I replied, “I don’t know.” I’ll never forget her response: “I’m sure Jim will find something for you to do.”

Now back to that rainy February night. I drove my 1964 VW Beetle to Jim’s motel—the Los Gatos Lodge. The storm that night blasted walnut-sized California winter raindrops. When I arrived, Jim stood outside under the motel’s porte-cochere, wearing a stylish wide-brimmed fedora and a long raincoat. In spite of these formidable clothes, my first impression was of his vulnerability. He had a cold and looked thin and almost frail. I immediately felt protective of him.

I drove Jim in my Volkswagen to La Hacienda, the nicest restaurant I knew in the area. Conversation came easily, and we laughed a lot. After enjoying a nice dinner, I took Jim to my apartment in a Victorian house where I had set up video equipment borrowed from Hewlett Packard. I showed him, with some trepidation, the two puppet videotapes I had been working on since our meeting the previous fall. He seemed to enjoy them, laughing at the appropriate points. Though I knew these efforts were not of professional quality, I couldn’t help being encouraged. Jim seemed to think I showed potential. We arranged to meet the next morning at his motel so we could discuss his plans for a Broadway show he was starting to design and build. He had a book of sketches of the various characters in the show, and as we leafed through them, he told me the story. I couldn’t believe this was happening—a personal story from Jim Henson!

As our meeting ended, Jim asked whether I would be interested in working on the Broadway show as a designer and possibly as a puppeteer.

Here was this famous man who cared so much about his work that he personally made the trip to meet someone who had no experience, but in whom he saw potential. Jim was hands-on. He grew his own talent, and he did it in every part of the company. Every detail was important to Jim. He gathered all sorts of people, in each of whom he saw something special. His company was like Noah’s ark, loaded to the gunwales with all types, including some natural enemies. During our voyage all these different people worked together, and in so doing, even the natural enemies came to respect and love each other. That’s what is so special about Jim, and that philosophy of celebrating diversity underlies everything we’ve done. I think our audience senses that, and it means a lot to them as well. It’s a vision of a better world. We had a reunion last year, and many past employees came. Over and over we heard them say it was the best job they ever had.

Of course, Jane Henson was right: Jim did find something for me to do. Quite a lot of things, in fact. And forty years later I’m still doing them.

And let me add a footnote about Jim’s apparent frailty: it didn’t take long to realize how much he loved to work; he even seemed to love being exhausted. We all worked very hard, but no one could keep up with Jim––he was the strongest one of all. Nevertheless, I still feel protective. In everything I do I try to protect and propagate Jim’s legacy. 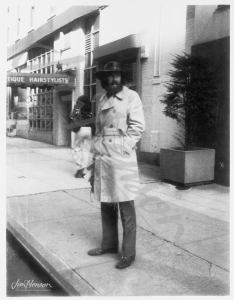 Jim in a wide-brimmed hat and raincoat around the time he met Dave Goelz, early 1970s. 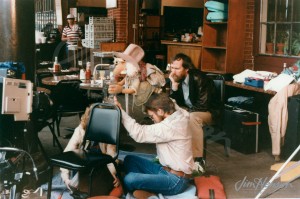 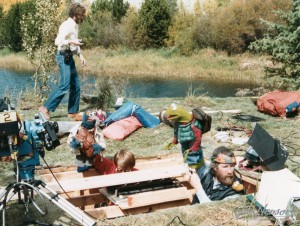 Dave Goelz and Jim on set of John Denver and The Muppets: A Rocky Mountain Holiday, 1983.