Over the past two decades or so, the “Night of 100 Stars,” a gala benefiting Martin Scorsese’s The Film Foundation, has become an Oscar-night tradition in Hollywood. It began as something slightly different. Originally, “Night of 100 Stars” was a benefit performance held in New York in 1982 celebrating the centennial of the Actors Fund of America, and airing as a three-hour television special. One of the many (over 100!) luminaries that first year was Miss Piggy who bantered and sang with Placido Domingo. In 1985, Jim attended a second performance, also held at Radio City Music Hall. As in the previous special, each celebrity was counted off on screen as they appeared singing, dancing, joking or simply walking across the stage (or in the case of New York City Mayor Ed Koch, holding open the door).The luminaries ranged from all types of entertainers (many of whom had appeared on The Muppet Show or in Jim’s films) to Dr. Seuss and Rosa L. Parks, and the orchestra was conducted by Leonard Bernstein. The Muppets, both from The Muppet Show and Sesame Street (and Travelling Matt) appeared, with Kermit the Frog and Big Bird getting top billing, and a tuxedoed Jim Henson making an on-camera appearance. Before the event moved to the West Coast, a third Actor’s Fund benefit was held at Radio City in 1990, but the Muppets did not participate.

Learn about the Night of 100 Stars today. 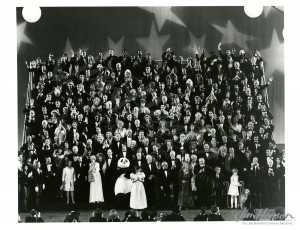 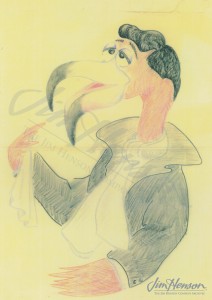