When Jim was writing proposals for holiday specials (i.e. The Muppet Halloween Show, The Muppet Income Tax Show, etc.) between 1969 and 1972, he suggested doing a Valentine Show with Goldie Hawn, no doubt a result of the fun they had together on her “Pure Goldie” special in 1971. In the end, when Jim was finally able to sell a Valentine special a couple years later, his human star was Mia Farrow. 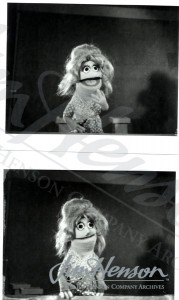 The Goldie Hawn puppet used on her television special, 1971.

This entry was posted in 02-February '71, 1971, Muppet Specials and tagged Mia Farrow, The Muppet Halloween Show. Bookmark the permalink.