While Alan Arkin’s wide-ranging roles included performances in thrillers and dramas, it was his comedy work in films like The In-Laws and The Russians Are Coming, The Russians Are Coming that would have made him an attractive choice to guest star on The Muppet Show. In the years before, he performed in the folk trio The Tarriers with Pete Seeger and Glen Yarborough, and acted and directed both on and off Broadway, in films and on television. With his multi-talents, Arkin was ready for anything with the Muppets.

The writers seemed to be taken with the horde of rabbits used the week before for the Doug Henning episode and wrote them into a script for Arkin as the Bunbun Brothers. While Arkin struggled with a Dr. Jekyll/Mr. Hyde type transformation due to the bungling Dr. Bunsen Honeydew’s potion, the Bunbun Brothers took to the stage. An enraged Arkin chased them and spent the program changing personalities. Kermit also drank the potion and finally, the Bunbun Brothers also turned into monsters. But the scariest of all was Miss Piggy. She didn’t drink the Jekyll/Hyde potion but she did become enraged when she heard Arkin croon a song that he wrote himself especially for the program, “Pig.”

The episode was nominated for an Outstanding Writing Emmy award, but perhaps most memorable for Arkin was seeing his thirteen-year-old son Tony backstage. With an interest in puppets, Tony was allowed to operate a butterfly for the Bunbun Brothers’ number. Clearly, the whole experience was positive, and Arkin reunited with the Muppets in 2011 in their latest feature film. 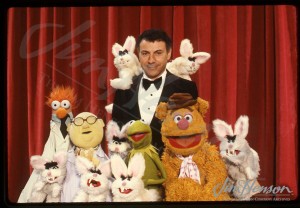