Jim always took a great interest in the way his characters were transformed into dolls, toys, books, and other consumer products. It was exciting for him to see the family of characters that he created especially for Sesame Street made available to their audiences in a physical way. Until that time, there had been very little licensed Muppet product – just a few promotional items related to the Wilkins commercials and the Muppetland specials and toy puppet versions of Kermit and Rowlf made by Ideal Toys in 1966. It was important to him that his characters looked good, and after some initial missteps, he and his team spent a good deal of time checking artwork to ensure consistency and appeal. When a first season promotion with a local dairy went on much longer that the agreed upon period with a poor depiction of Big Bird, the CTW lawyers asked the dairy to stop using those cartons. It took almost two years to get them off the shelves (by which time the dairy had probably used up their supply.)

Jim was certainly gratified as quality Muppet product began to roll out in a big way with Sesame Street, but he also felt strongly that the products needed to have merit. This was linked to his overall concern about the impact of television on children. He noted, “I think you develop a sense of responsibility. You realize the importance of what you’re putting out there in terms of television to young kids. There are obviously certain things which shouldn’t be happening. Sometimes people make a fairly dumb toy and try to turn that into a television show. That’s obviously not a good idea. On the other hand, you have something like Sesame Street which is a television show, and there are toys that come from that which feels okay. You know, we’re trying to do that correctly.” 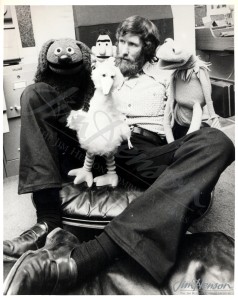 Jim with some of the first Sesame Street toys. 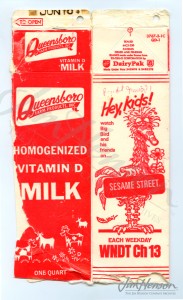 A milk carton promoting Sesame Street’s first season with artwork that did not meet Jim’s standards, 1970.