In October 1983, Jim took a trip to London and met with an array of people that were potential collaborators on his second fantasy film Labyrinth. With Dennis Lee already working on the “novella” that would serve as the basis for the film’s story, Jim was eager to find a screenwriter that shared his comic sensibility and that could match words to Brian Froud’s visual concepts. Jim was a great fan of Monty Python and was already well acquainted with John Cleese from his Muppet Show and Great Muppet Caper work. Python member Terry Jones was an obvious choice to write the script and Jim sought him out. As it turns out, Jones was, at the same time, thinking about doing another project with Jim. According to Jones, “I had been thinking of turning Erik the Viking into a film, and thought it was something Jim Henson might be interested in. I rang up his office, and they said, ‘That’s funny – he was trying to reach you yesterday.’ Jim’s daughter Lisa [then at Warner Bros.] had just read Erik the Viking and suggested that he try me as a screenwriter.” So, Jim and Jones met in London and Jones signed on. In a follow up note, Jim wrote to Jones, “I’m extremely pleased that you will be joining us on this project. Erik the Viking was so full of lively adventures and wonderful concepts; your contributions to Labyrinth will surely make the script jump to life.”

Learn more about the script development on Labyrinth. 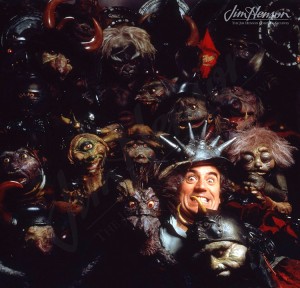 Terry Jones with the goblins from Labyrinth.