By 1979, with his hit film Rocky and the sequel premiering that year, Sylvester Stallone was a huge star and a natural choice as guest star on The Muppet Show. In his tough guy persona, he appeared as a gladiator, ready to make short work of a cowardly lion. But then the lion began to sing, and astonishingly, Stallone joined him in a duet of “Let’s Call the Whole Thing Off.” Pursued by groupies backstage, Stallone took refuge in his dressing room and shared leading man tips with Link Hogthrob. A sentimental musical number of the turn-of-the-century song, “She’s Only A Bird in a Gilded Cage” further underlined Stallone’s surprising versatility as a performer. 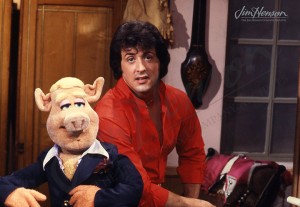 Sylvester Stallone on The Muppet Show. 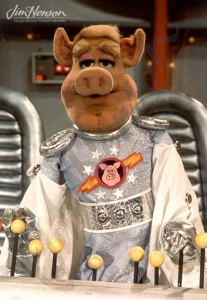 On The Muppet Show, Link Hogthrob shared his grooming tips with Sylvester Stallone. 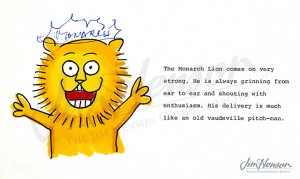 Long before The Muppet Show, Jim designed this lion to sell Monarch Margarine, 1968.

This entry was posted in 01-January '79, 1979, Muppet Show and tagged Sylvester Stallone. Bookmark the permalink.