Jim’s Muppet Show pilot “Sex and Violence” which aired on ABC on March 19, 1975 marked the debut of a host of new characters that would go on to become regulars on the eventual series. Along with The Swedish Chef and Statler and Waldorf, the members of the house band, The Electric Mayhem, were a particular joy for Jim. The rhythms and camaraderie of playing together in a band was much like that of performing puppets together in a repertory company like the Muppets, and The Electric Mayhem gave Jim’s team a double-dose of collaborative fun. 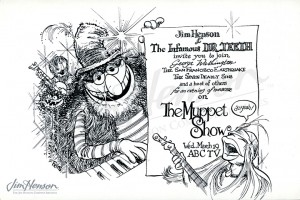 Dr. Teeth and The Electric Mayhem were featured on the announcement card for The Muppet Show pilot in 1975. 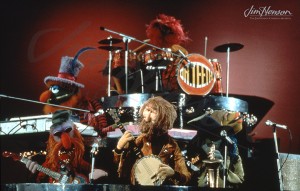 The Jim puppet was The Electric Mayhem’s front man in this publicity photo from The Muppet Show pilot.

This entry was posted in 01-January '75, 1975, Muppet Show and tagged Statler and Waldorf, The Electric Mayhem, The Swedish Chef. Bookmark the permalink.