Having spent the second half of 1978 shooting his first feature film and pushing development on The Dark Crystal, Jim flew back to London refreshed and ready to dive back in to his series. Over four weeks in January, he (and Kermit) hosted an eclectic group: Sylvester Stallone, Roger Miller, Roy Rogers and Dale Evans, and Lynn Redgrave. Today, perhaps, Miller is the least well known of the group, but in the 1970s, his fame as a song writer was widespread. With hits like “King of the Road” and “Me and Bobby McGee,” he won numerous Grammy awards and performed at the White House. Miller was delighted to be on the show and recognized why the Muppets were such a success. “I think the Muppets are about the only entertainment phenomena that are relevant to now,” he explained, “Most entertainment today is either nostalgic or futuristic. The Muppets are relevant to now.” 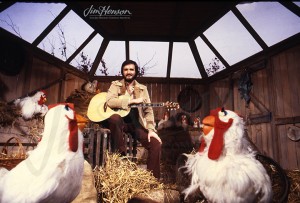 Roger Miller on The Muppet Show. 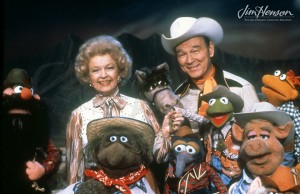