Given that the mascot for the 1984 summer Olympic Games held in Los Angeles was Sam the Olympic Eagle, it’s not surprising that the Muppets were invited to participate in a television special commemorating the games. An Olympic Gala, produced by Jerry Weintraub who at one time had been business partners with Jim’s agent/manager Bernie Brillstein, featured numerous celebrities (many of whom had appeared on The Muppet Show) and aired on ABC to launch the Games telecasts in July. In an earlier sign of support for Team USA, Jim had provided an autographed Miss Piggy glove and letter of authenticity to the US Olympic Committee for a fund raising auction.

Twenty years earlier, Rowlf was caught up in Olympic fever, and his October 15, 1964 segment for The Jimmy Dean Show was so themed. He entered huffing and puffing as he completed a 100-meter race. When Dean asked what was going on, Rowlf explained that he was training for the Animal Olympic Games, “Just like the ones in Tokyo, but with twice as many legs!” Describing how animals gathered from all corners of the earth provided opportunities for a plethora of puns. When Rowlf told of a Gnu driving in from Tibet, he noted, in a nod to a popular advertising refrain, that, “We let Hertz put GNU in the driver’s seat.” After becoming unnerved by a dropped shot-put and a mis-thrown javelin, Rowlf decided to withdraw from the team. But Dean bucked him up, encouraging him with a song, “You Gotta Have Heart.” 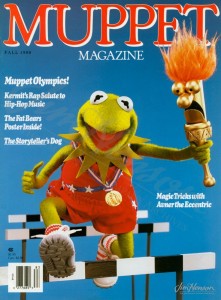 The Muppets celebrated the 1988 Games with an Olympic-themed cover for Muppet Magazine.