In 1982, in commemoration of what would have been George Washington’s 250th birthday, Norman Lear produced a television special, under the auspices of the People For The American Way, called I Love Liberty. The star-studded celebration of what it means to be American in all its messy diversity featured a segment, introduced by Big Bird and Martin Sheen, with the Muppets reenacting the Continental Congress. Inherently serious (as Fozzie noted, “Kermit, this stuff is not funny!”) the proceedings were livened up by Miss Piggy’s interruptions (she was dressed as George Washington and Abraham Lincoln) and made entertaining by the finale, a rousing musical number, “The Brotherhood of Men” combined with “When The Saints Go Marching In.” The script was written by Jerry Juhl and directed by Jim and his Sesame Street colleague Emily Squires. The Muppet costumers created detailed 17th Century outfits for the whole crowd (including rats), and Miss Piggy got a special flag-themed glitzy dress with Statue of Liberty crown. While the cast was comprised of Muppet Show characters (including, of course, Sam the American Eagle), Sesame regulars Ernie, Bert and Grover joined the number as a colonial fife and drum trio.

See the Muppet segment from I Love Liberty. 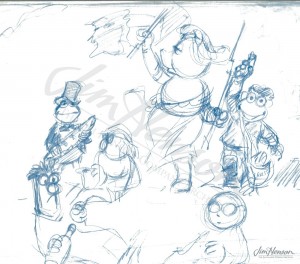 Lauren Attinello’s sketch of Miss Piggy in the guise of a different Lady Liberty – she is portrayed as Delacroix’s “Liberty Leading the People” from the French Revolution. 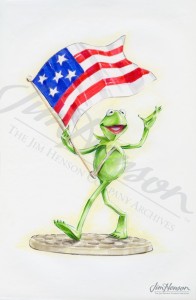