At the start of 1973, entertainer Raquel Welch made her Las Vegas debut at the Las Vegas Hilton. TIME magazine reported in their January 8th issue, “’Excited but not nervous’ was the way Raquel Welch described her state of mind as she set out, with a midget and an array of animated puppets, to make her nightclub debut at the Las Vegas Hilton. Skeptics may have expected Raquel to provide little more than a few wiggles, but according to Variety’s dazzled correspondent, she ‘terped with know-how and chirped with appealing huskiness.’ All in all, he concluded, it was ‘one of the most unique shows ever presented in Las Vegas.’”

Jim was in Los Angeles that month, meeting with Michael Eisner at ABC about The Muppet Valentine Show and shooting segments with his colleagues Frank Oz and John Lovelady for an NBC ecology-themed show called Keep US Beautiful. He might have seen the write up about Welch’s show and, having done puppets on the Vegas stage with Nancy Sinatra two years earlier and being in the midst of trying to develop his own stage show, would have been curious. He took advantage of the relatively short distance between LA and Vegas and went to see the show. There is no evidence that Jim and his cohorts met Welch then, but when it came time to invite performers to guest star on The Muppet Show, Welch was on the list. 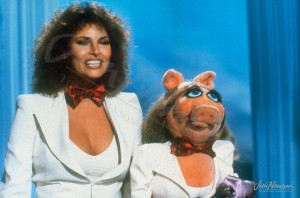 Raquel Welch and Miss Piggy on The Muppet Show, 1978.