In early January 1968, Jim shot a funny short about a typically incompetent robotic service station attendant to show as part of the entertainment at a series of trade shows for Getty Oil’s “Flying A Dealers.” It was not Jim’s first involvement with the oil business. Back in 1963, he had done work for the Marathon Oil company, creating a commercial featuring singing gasoline pumps. In 1966, he created two charming motor characters, Clyde and Charlie, for American/Standard Oil. Working with Pat Kelly at the D’Arcy Advertising agency in Chicago and Henson staffers Jerry Juhl, Don Sahlin and Jerry Nelson, Jim shot two versions of a 60-second commercial titled “Confused” – one for American Oil and one for Standard Oil.

In follow up correspondence, Pat Kelly indicated that the client had been somewhat prickly and a bit hard to please. Kelly must have been somewhat new to the job; he wrote to Jim, “I learned from this job, and from experienced producers here, that one should make two mixes, one for the commercial and one for client approval…I knew at the time that what you wanted wouldn’t be approved. What I didn’t know was that all the producers here usually make two mixes to begin with.” Kelly must have discussed filmmaking in general with Jim and was inspired to try it himself. He continued in his letter, “I bought a Bauer Super 8 camera and projector to experiment with film techniques and shorts. The projector has a mechanism that enables it to sync regular audio tape to pictures – even lip-sync is perfect every time.” He attached a report from a marketing test where audiences were shown Jim’s commercial along with ones for other brands. While the Muppet commercial watchers measured somewhat low on “brand identification,” they were clearly entertained, finding Clyde and Charlie to be “honest,” “fresh,” and “more exciting.”

See Jim’s singing gasoline pumps in his 1963 commercial for the Marathon Oil Company.

Read about the automated service station attendant that Jim created for his Getty Oil Show presentations and see him in action. 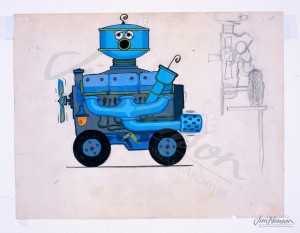 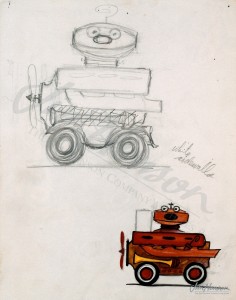 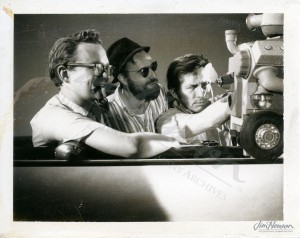