In early January, Jim wrote in his journal, “ACC shake up- Lew Grade sells out to Robert Holmes à Court- I meet with Robert on Jan. 17.” Australian entrepreneur Robert Holmes à Court had managed to buy up enough shares of Lord Lew Grade’s company ACC to take charge of it. This meant that he now had a controlling interest in Jim’s projects that had been financed by Grade including The Muppet Show, the first two Muppet movies, various TV specials and, most importantly for Jim at the start of 1982, The Dark Crystal. Jim met with him on the 17th to discuss their mutual interests. Given that Holmes à Court was a businessman with little passion for the art of the entertainment industry (unlike Grade who came up through the business and understood Jim’s creativity), Jim recognized that they may not see eye to eye on priorities. On February 23rd, he wrote, “Negotiating with Holmes à Court – to move D.C. release date.” Struggling with getting the final version of his film done, it was frustrating to Jim to have to answer to Holmes à Court’s suggestions that looked more at the bottom line than at the filmmaking.

In an audacious move, Jim decided to combine his assets and buy out the rights to The Dark Crystal. Holmes à Court, who didn’t really get Jim’s vision and see it as an asset on the books, was happy to unload it (with much tough negotiating). The film opened that December and did well enough at the box office to validate Jim’s purchase. Two years later, Jim bought out the rest of the Muppet properties from Holmes à Court, giving Jim full control of his body of work. 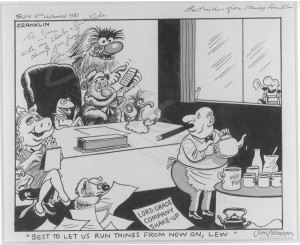 Editorial cartoon by Stanley Franklin relating to the “shake up” at ACC inscribed to Jim by Lord Lew Grade. 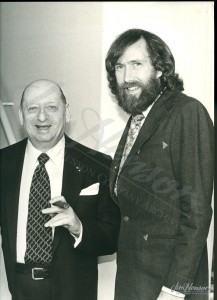 Jim with his friend and business partner, Lord Lew Grade.

This entry was posted in 01-January '82, 1982 and tagged Lord Lew Grade, Robert Holmes a Court, The Dark Crystal, The Muppet Show. Bookmark the permalink.