For several years, Jim pursued the possibility of doing a project using the computer generated animation technology being developed by Digital Productions. After a few false starts, he was happy to be able to take advantage of their innovations to create the CGI owl that flew through the opening title sequence for his 1986 film Labyrinth. While a seemingly small thing, it marked a potential new direction for Jim, one that resulted in the creation of the Henson Digital Puppetry Studio currently in use to create shows like Sid the Science Kid.

Learn more about Jim’s interest in the uses of digital technology in entertainment. 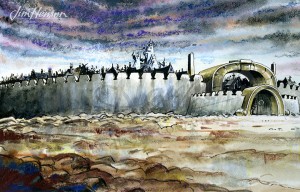 Elliot Scott’s set design for the Goblin Town in Labyrinth.