Fraggle Rock producer Larry Mirkin recently shared his reminiscences about how he came to meet and work with Jim Henson and what he learned.

I grew up in Cumberland, Maryland where as a boy I watched with glee those Wilkins’ Coffee ads that Jim had done in his early days in Washington. Over the years, I became more and more aware of The Muppets and I absolutely loved them, but I had no idea that I would ever be part of the “family.” Life, however, is full of miracles and what happened was a big one in my life.

By education, experience and circuitous means, I found myself in 1982 a “contract producer” in the TV Drama department at the Canadian Broadcasting Corporation in Toronto, having arrived 8 years earlier to take a job there as a story editor, working with writers and producers to develop screenplays. That fall I had just finished a TV movie at the same time that Jim had finished shooting the first 12 episodes of “Fraggle Rock,” although they had not gone to air yet. Duncan Kenworthy, a co-creator of the show and fine producer who continues to produce wonderful feature films, produced those first 12 episodes but he was slated to return to the UK where he lived and to produce the international versions of the show. So Jim was looking for a local producer to take over. He also was looking for someone who was good with story and knew how to work with writers. As is often the case with the first episodes of any series, let alone one that was a complex and rich a world as Fraggle Rock, the first scripts hadn’t quite found their “collective stride.”

By coincidence, the Head of Variety at the CBC (where the show was based) was a man named Stan Colbert, who had been my Executive Producer on many drama projects. More than anyone else, Stan taught me my craft as a drama producer and he recommended me to Diana Birkenfield, who was Executive In Charge of Production of the show for Jim. (Stan also recommended the song-writing team of Dennis Lee and Phil Balsam, the musical director Don Gillis, director George Bloomfield and many others who played important roles in the show.)

Diana and I met and connected immediately. She was from Pittsburgh, about 100 miles from my home town, and she confirmed my life-long experience that I never met anyone from Pittsburgh that I didn’t like. Had we not had such a good time in that initial meeting, my entire life would have been different. She was the first “Henson person” I met and without her, I would have never met Jim, Jerry Juhl, and Jocelyn Stevenson, who continue to have a deep impact on my life and my work, as well as the other wonderful artists and craftspeople with whom I was privileged to collaborate. Diana said I should come down to New York the following Sunday (this was right before Thanksgiving) and she sent me a couple of shows and scripts for me to consider before the meeting.

Now, from my perspective, this was pretty amazing. I loved the Muppets and now I had an opportunity to work with them? Who plans for that? I flew down on what I remember as a bright day and arrived at the playful townhouse on 69th Street, which was home of Henson Associates. Even on a Sunday there was a palpable energy about the place, the feeling of joy and creativity that you would hope to expect. Diana introduced Jim and me and then left the room while we got to know one another. We talked about my background in story and drama and we talked very briefly about what I observed in the “Fraggle Rock” shows/scripts I’d seen. Jim was an easy person to be around, particularly since we both laughed a lot, but we were just getting to know one another. I explained how I work with writers. I’m an extremely collaborative producer, even if I have strong ideas about certain things. Ultimately, for me, it’s about the best idea winning; it’s not about the power dynamic. The “management structure” is just about implementing the best idea.

After a short while Diana interrupted our meeting. Now, you need to know that Diana was very protective of Jim, so she was doing a check-in to make sure everything was okay. I’m sure she was ready to throw me out of his office (politely) had Jim determined I was the wrong guy for the job. (He would have just nodded his head an imperceptible amount and Diana would have understood). She said words to the effect of, “now, Larry has just come down to meet with you and check things out. Nobody’s making any commitments to anybody right now” and Jim interrupted her to say, “Well, I’m ready to make a commitment.” Both Diana and I were floored. It had been 20 minutes into the meeting! I stumbled around and reverted to my “professional filter” response: “well, I’m really interested, but can I think about this overnight?” Of course, I didn’t want to think about it overnight, but I thought that was the “grown-up” thing to say.” Jim, of course, had no such filter. He went with his instinct, a point I’ll come back to in a moment.

We had agreed that the next thing to do was for me to fly to California to meet with Jerry, because that was the key relationship. If we couldn’t collaborate, then I was the wrong person for the job. Because of Thanksgiving, I flew out about two weeks later. Jerry and Susan Juhl lived at the time in a small town called Cambria, equidistant from San Francisco and Los Angeles. By the time I arrived, I was really nervous, probably more nervous than when I met Jim, because by this point, I really wanted the job. I’d been told by a number of people, “Oh, you’ll like Jerry. He looks like Santa Claus.” Now the truth is he didn’t look like Santa Claus at all, although he did have great long white hair. But the truth is also that he “felt” like Santa Claus; in many ways, I think he really WAS Santa Claus – at least to those of us who had the honor and joy of working with him. But when I came to his and Susan’s home, I didn’t know any of this. We had some tea and a bite to eat and it was all very warm, but then we moved to his study to talk about the scripts.

So, this was the “make or break” time and I knew that I had to tell Jerry exactly what I thought about what I’d seen and read and I did – both all of the wonderful things and also, the not-so-wonderful things, at least from my perspective, and suggest some ways of moving forward. After I went on for a few minutes, he smiled and he said, “You’re absolutely right.” And we both knew from that moment that we could work together and have fun doing it. We quickly rolled up our imaginative sleeves and started trading ideas – and laughing. We laughed from that day until Jerry’s death in 2005 – through all of “Fraggle Rock,” “The Jim Henson Hour,” and many, many conversations, phone calls, e-mails, and meals. When you work with the Fraggles or the Muppets you both eat and laugh a lot together.

Now, there’s something important to say about Jim here because my personal experience is a really good example of one of his greatest qualities, one that most people don’t think about. Jim is recognized as one of the great performers in history; a great designer and director. He revolutionized puppetry in ways that are almost unimaginable and his influence continues to be immense – far beyond the strictly hand-puppet world in which he’d begun. But nobody thinks about what a great producer he was. One of his greatest talents was his gift for finding the right person with the right skills and the right personality for a particular project. He didn’t care where you lived. Many of us who worked on “Fraggle Rock” lived all over the world. I lived in Toronto, Jim in NY, Jerry in Cambria, Jocelyn in Wales (and then Scotland), Michael Frith in NY, and the key performers and other craftspeople were scattered as well. But Jim trusted his instincts with each one of us. He knew that we were the right people to do this show and he found us and put us together, supported us and protected us (with Diana and others) so that we could serve an idea that was bigger than any of us. That idea was called Fraggle Rock.

I learned many things from Jim, chief among to love and respect performers and to pay deep attention to the overall design of your show. But perhaps most important of all was something I learned as a result of that original meeting, even if I didn’t know it at the time. I learned from Jim Henson the importance of creating the right team, the importance of personality to go along with talent and of trusting your instincts when it came to people. All of us had our own unique skill set, but there are lots of other people in the world who have similar skill sets. I had certain skills but I also had the right personality for the team for this show. Jim knew this long before I did.

One of the key reasons, in my opinion, that Fraggle Rock fills us (the creative team and the audience) with joy even 30 years later is that we shared values. We shared the values of the show, as you may expect, but we also shared the same values in how you go about creating a show. The creative process that every day starts with nothing but possibility requires, at least when you work on “Fraggle Rock” or with the Muppets, a deep love of that place where you have “nothing but possibility.” You need to share with everyone else the trust that together all of us will create something of value and joy out of that nothing.

And we did: we valued how we worked together; we were respectful of one another’s skills, all in the service of the best idea. If you were on the set, even for ten minutes, you could feel this kind of collaboration. There was never an argument on the set. We all just believed that in order to make this show we were going to make it by means of this joyful process. Make no mistake: all of this started with Jim who over a long (or a short) period of time chose every one of us. Jim wasn’t around a lot during production, as he was busy on Labyrinth and other projects, but he brought us together, trusted both us and the process. And that’s what a great producer does. 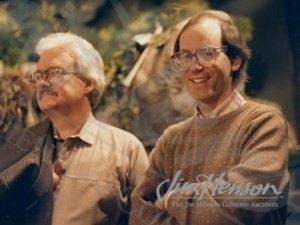 Larry Mirkin (right) on the set of Fraggle Rock with Jerry Juhl, 1980s.