By 1976, Peter Ustinov had won Academy Awards for his performances in Spartacus and Topkapi and Emmy Awards for performances in Barefoot in Athens and Storm in Summer. His writing for stage and screen won him numerous honors and his recording of “Peter and The Wolf” was awarded a Grammy. Ustinov was made Commander of the British Empire for his “service to the arts” and was awarded the Benjamin Franklin Medal by the Royal Society of Artists. Clearly, the only thing left to add to his list of accomplishments was to be invited to guest star on The Muppet Show. In July 1976, Ustinov got his chance, taping an episode that took advantage of his wide ranging talents. He portrayed a robot politician changing from one national type to another and ultimately exploding. His reputation as an intellectual was parodied as he expounded on economics with Fozzie, consulted in the guise of a physician with the Muppet newsman, and finally appeared on a panel as a psychiatrist.

No doubt, great fun was had by all. When Jim set his second feature film The Great Muppet Caper in London, he looked back over his roster of Muppet Show guest stars to fit a few of the British performers into cameo roles. Given the parallels between Caper and Topkapi, Ustinov was an obvious choice (his Topkapi costar Robert Morley also got a cameo). Ustinov played the truck driver who came to Miss Piggy’s aid by giving her a lift. They bantered easily like old friends and despite the frigid January weather, the atmosphere was pleasant. “The Muppets generated warmth even on a cold Monday morning,” Ustinov remarked appreciatively. 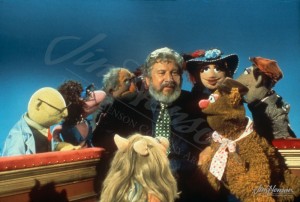 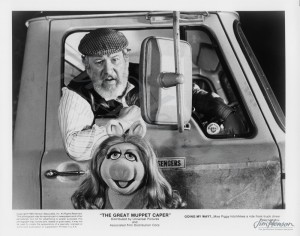