Along with the Muppet variety show appearances, Jim was doing a lot of on-camera talk show appearances during the fall of 1971. In October, he did the Pierre Berton show in Toronto and with his team, Jim did the entire ninety minutes of Dick Cavett’s show that Thanksgiving. There was a lot to talk about – not only had the nation embraced Sesame Street, but Jim was finding success with his “Tales from Muppetland” specials and was eager to promote the rerun of his special, The Great Santa Claus Switch, which would air that December 16th .

Jim taped David Frost’s talk show (which would also air on the 16th) at The Little Theatre on West 44th Street in New York with his colleagues Frank Oz and Don Sahlin. He and Frank performed their classic dryer-hose piece, “Java,” and Rowlf and Kermit bantered with Fred the elf and Dripsnout the Frackle from The Great Santa Claus Switch. Jim also showed a clip from Sesame Street of a Muppet singing the 1937 composition by Allie Wrubel and Herb Magidson “Gone With The Wind” as he and his gal are blown away. Jim reprised this bit on The Muppet Show with guest star Jim Nabors singing the lead.

David Frost clearly was impressed by Jim and his Muppets, and in 1979, Frost, in his role as executive producer of The American Movie Awards, graciously announced that the National Association of Theatre Owners had voted a special award to, “…one of the most inspired, up-beat and cheerful successes of this past film year – Jim Henson’s The Muppet Movie.” Miss Piggy was miffed, naturally, that the award was going to Jim rather than her. But Jim handled it diplomatically, allowing Miss Piggy to speak for the group. Happy to oblige, she said, “David, Darling, we are so very, very pleased with this beautiful award. And honored. And flattered. And David, Darling? What are you doing after the show?”

Learn about subtraction on a different (later) Sesame Street take on “Gone With The Wind”. 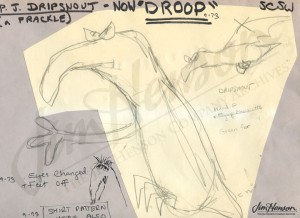 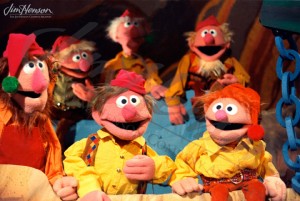 Elves from The Great Santa Claus Switch, including Fred.