With holiday shopping upon us, there are many fond memories of toy circulars folded into the newspaper or the “wish book” catalogues from major department stores like Sears and Montgomery Ward. In 1979, there were lots of Muppet products, both from Sesame Street and The Muppet Show, which found their way onto parents’ shopping lists. Jim took a deep interest in how his characters appeared as dolls, toys, on puzzles and posters, and made a point to meet regularly with his licensing group to review products and share ideas.

As he noted in his journal, 1979 was “A Very Major Big Year” – The Muppet Show was enormously popular, The Muppet Movie was a hit in theaters, the company moved into its new headquarters (eventually known as “The Muppet Mansion”), Jim bought a home in London, Kermit hosted The Tonight Show, The Art of The Muppets exhibit started its tour, and work began in earnest on The Dark Crystal. On the licensing side, Jim had much to be proud of – Miss Piggy was reproduced as a doll by Fisher Price and starred in her first calendar (for 1980). There were record albums for the movie, with John Denver, and Sesame Street (Sesame Disco!) and a Muppet Show book published in multiple languages, including Serbo-Croation (titled “Mapet Sou”). There was much to celebrate and along with meeting with his product group that weekend in December, Jim hosted a grand Christmas party at the St. Regis hotel for about 160 guests and then a smaller party for friends in his new building. Jim’s Muppets were on the airwaves, on movie screens, on stereos, on book shelves and in toy chests. A very major big year indeed. 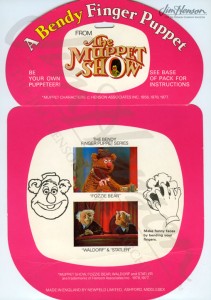 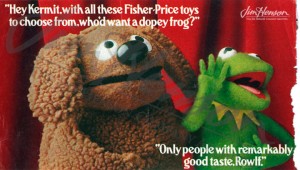 Advertisement for the Fisher-Price Kermit and Rowlf dolls.

This entry was posted in 12-December '79, 1979 and tagged Kermit, London, Miss Piggy, Sesame Street, The Art of the Muppets, The Dark Crystal, The Muppet Movie, The Muppet Show, The Tonight Show. Bookmark the permalink.