When comic actor Peter Sellers joined the Muppets for their show in its second season, he fit right in. In a promotional interview, Sellers commented that, “One of the most endearing qualities of the Muppets is their sense of ‘family’ – I don’t mean that only in that ‘this is a family show,’ but in the way all the people behind the Muppets work together. Working with them, they give off an atmosphere of unity and relaxation and of knowing and respecting each other’s ideas and goals. For an outsider appearing in their midst, that is very reassuring.”

Seller was, apparently, a big fan and had tapes of all the episodes at home. In a note to Jim, head writer Jerry Juhl related Seller’s assessment of various aspects of the show. He preferred when the Muppets were the stars and the guest was sort of worked into the action rather than being the center of the action. He thought Dom DeLuise was “hilarious” and his favorite show was the Emmy award winning Rita Moreno episode. He recommended that Jim invite comedian Spike Milligan onto the show as he would blend well with the Muppets (Milligan appeared in the third season). “Ultimately,” Sellers reminded Jim, “the Muppets themselves are the genius and stars of the show.”

Sellers did his part (or many parts) utilizing his versatility to play a gypsy violin player, a masseur man-handling Link Hogthrob, and Queen Victoria. Seller’s final number featured him as a missionary preacher singing, “Cigarettes, Whusky, and Wild, Wild Women.” 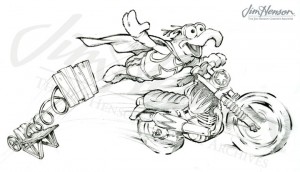 The Great Gonzo was a favorite of Peter Sellers and was featured in his Muppet Show episode. This is a concept by Michael Frith for Muppet*Vision 3D, 1989. 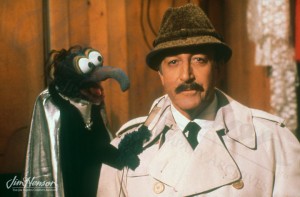 Peter Sellers revealed that Gonzo was his favorite character on The Muppet Show, 1977.