In the spring of 1986, Jim began negotiations to option the rights to make a film version of Roald Dahl’s novel The Witches. By the end of the year, a treatment by Allen Scott (who would also write the script) had been commissioned, and based on that, Chris Carr in the London Creature Shop completed a proposal for the puppets, prosthetic make-up and special effects. The film would be directed by Nicolas Roeg, financed by Lorimar Film Entertainment (headed by Bernie Brillstein), distributed by Warner Bros. (where Lisa Henson was a film executive), produced by Jim Henson Productions with Jim serving as Executive Producer. His Director of International Production, Duncan Kenworthy, coordinated things on the Henson side. Along with the normal complications inherent in any film production, both Jim and Kenworthy spent some time in correspondence with various groups representing modern witches (like the Witches League for Public Awareness) as well as extensive correspondence with Roald Dahl himself. While he was a fan of Jim’s work and initially optimistic about Jim’s approach, as time passed, he expressed displeasure with various aspects of the film (including certain misuses of what he considered proper grammar), especially the choice to change the ending and his belief that it was too scary. While test audiences preferred a happy ending with the boy changing back to his original form, Dahl felt that his ending, where the boy remained a mouse, was better. In his explanation to Jim, he wrote, “It is also a happy ending. The boy is happy as a mouse. He tells us so. And there is a fair bit of elementary philosophy in it, too. What, after all, is so marvelous about being a human? Mice are far happier. They have far less worries.”

Filming began in Bergen, Norway in April with additional units working on location at the Headland Hotel in Cornwall and in the Bray Studios outside London. Most of the work was completed by mid-summer, including filming the two different endings. By October, The Witches was ready for a screening in New York at Broadway Video, and Jim saw the completed film for the first time. It was tested with various audiences on both sides of the Atlantic and was finally released in the UK on May 25, 1990 and premiered in the US on August 24. The British press made mention of Dahl’s public complaints about the film but found much to admire. The London Times described is as, “snappy and scary” and lauded the Henson work, saying the film, “gives a fine example of [Jim’s] memorable talent with the Daumier-like transformations of women into witches.” The Sunday Telegraph called the movie, “the delight of the week” and “one of the most entertaining family films of the past decade.” On this side of the Atlantic, Roger Ebert wrote that, “The best thing about Nicolas Roeg’s film of Dahl’s book The Witches is its dark vision.” While he warned that, “…the movie might be too intense for smaller viewers, The Witches is an intriguing movie, ambitious and inventive, and almost worth seeing just for Anjelica Huston’s obvious delight in playing a completely uncompromised villainess.”

Learn more about The Witches. 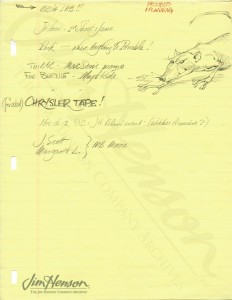 Michael Frith’s meeting notes from 1986 with a doodle inspired by discussion of The Witches.

Storyboard panel from The Witches, 1988. 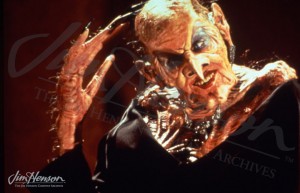 Anjelica Huston as the Grand High Witch Miss Ernst in The Witches. 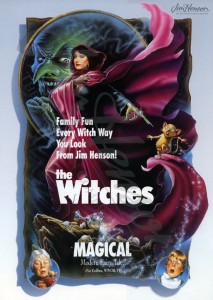