In 1981, Jim and his team were approached by the organizers of Pasadena’s annual New Year’s Day Tournament of Roses Parade about participating the following January. With input from Michael Frith, a float featuring Miss Piggy and Kermit the Frog was created with much back and forth with the fabricator in California, Fiesta Floats. A small group went out for the parade, including performer Richard Hunt who, in the guise of Sweetums, danced along the route interacting with the crowds. It was a huge success and the parade people couldn’t have been more thrilled. Director of Advertising Bob Schumacher wrote warm thank you letters afterwards extolling the professional and creative work done by Jim’s assistant Nancy Bielen, and Mary Streiff and Faye Kreinberg from the Muppet workshop. To Richard Hunt, Schumacher wrote, “You sparked spontaneous joy with everyone with whom you came in contact. And out of costume, you were totally charming.”

It’s not surprising then that the Muppets were invited back for the 1984 parade. Miss Piggy got star billing with her own float celebrating the 125th anniversary of the YWCA. With a large sign saying “One Giant Leap for Womankind”, the float featured a reclining astronaut Miss Piggy, dressed in her spacesuit. Jim attended the parade with his children Lisa, Brian and Heather and clearly had a good time. In a letter to Don Anderson of Fiesta Floats, Jim wrote, “The floats were most outstanding, and my family and I truly enjoyed watching them. Thank you for being a most gracious host.” In his note to one of the designers Roaul Rodriquez, Jim wrote, “Congratulations on the parade. You dazzled us all.”

The 1986 parade featured a Rand McNally Sesame Street float, and Miss Piggy and Kermit appeared again in 1990 on a “Lassoed by Love” themed float, this time dressed in country western attire. A special collector pin designed by Michael Frith was created as a souvenir that year. The last time Kermit was connected with the Tournament of Roses Parade was in 1996 when he served as Grand Marshal, riding in the lead car. His appearance was celebrated and the Henson team received all sorts of mementos of the day: a commemorative drum head, a grand marshal ribbon, an incised crystal vase and the game coin in a presentation case. 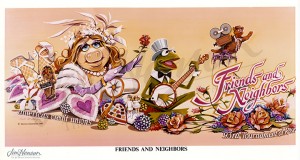 Muppet float design for the 1982 Tournament of Roses Parade. 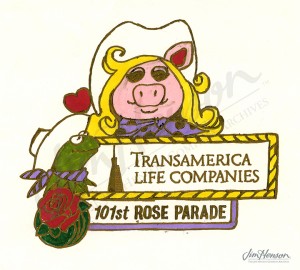