Arts and crafts were often part of the activities going on at the Henson house. Whether it was building dollhouses, carving pumpkins, or painting furniture, Jim loved sharing these creative moments with his wife Jane and their five children. Jim enjoyed making his holiday greetings by hand, creating silkscreened images, sketches or photos to send out, and he often made small gifts. For his staff in 1974, Jim enlisted the help of his children. The Henson family made a population of small creatures out of bread dough which Jim gave his team to use as ornaments. Some still survive and are treasured to this day by veterans in the workshop. 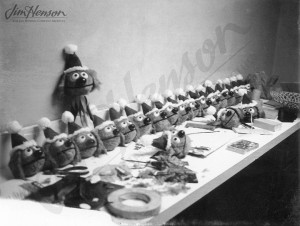 This entry was posted in 12-December '74, 1974, Social and tagged Christmas, holidays. Bookmark the permalink.